This Matra Murena is a rare S and very well maintained. Factory equipped with tinted glass, electrically operated side windows, alloy wheels and metallic paint. The original S adjustments are, a lighter flywheel, fast camshaft, twin Solex carburetors, modified ignition, the original rear spoiler comes with the car separately. The car is very original but equipped with stainless steel cooling pipes, Devil exhaust manifold and a radio / CD player. The Murena has a galvanized chassis and 142 hp as standard. Below you will find a nice story about the history of Matra and the Murena.

By 1980, the Bagheera had been replaced by Project M551, or the Murena. It was designed by Greek stylist Antonis Volanis, who also worked on both the M530 and the Bagheera. He took the best elements from the Bagheera and built upon them. The Murena had the familiar hatchback style and mid-engine as the Bagheera, which made for easy access. Most notably, the Murena carried over the distinct feature of three-across seating. The main differences were that the Murena had a higher build quality and more power.

Unlike Matra’s earlier cars whose frames were prone to rust, the Murena utilized an industry-first hot-dipped galvanized frame that was backed by an unprecedented six year rust-through warranty. The galvanizing process added protection and increased the torsional stiffness of the chassis by a measurable amount. After the process was completed, the body was riveted and bonded to it, producing a strong and long-lasting vehicle. The Murena’s body consisted of even fewer panels than the Bagheera, only 12 compared with 19, comprising its sleek 70’s wedge profile. This resulted it a drag coefficient better than the Bagheera, down to CW 0.32. 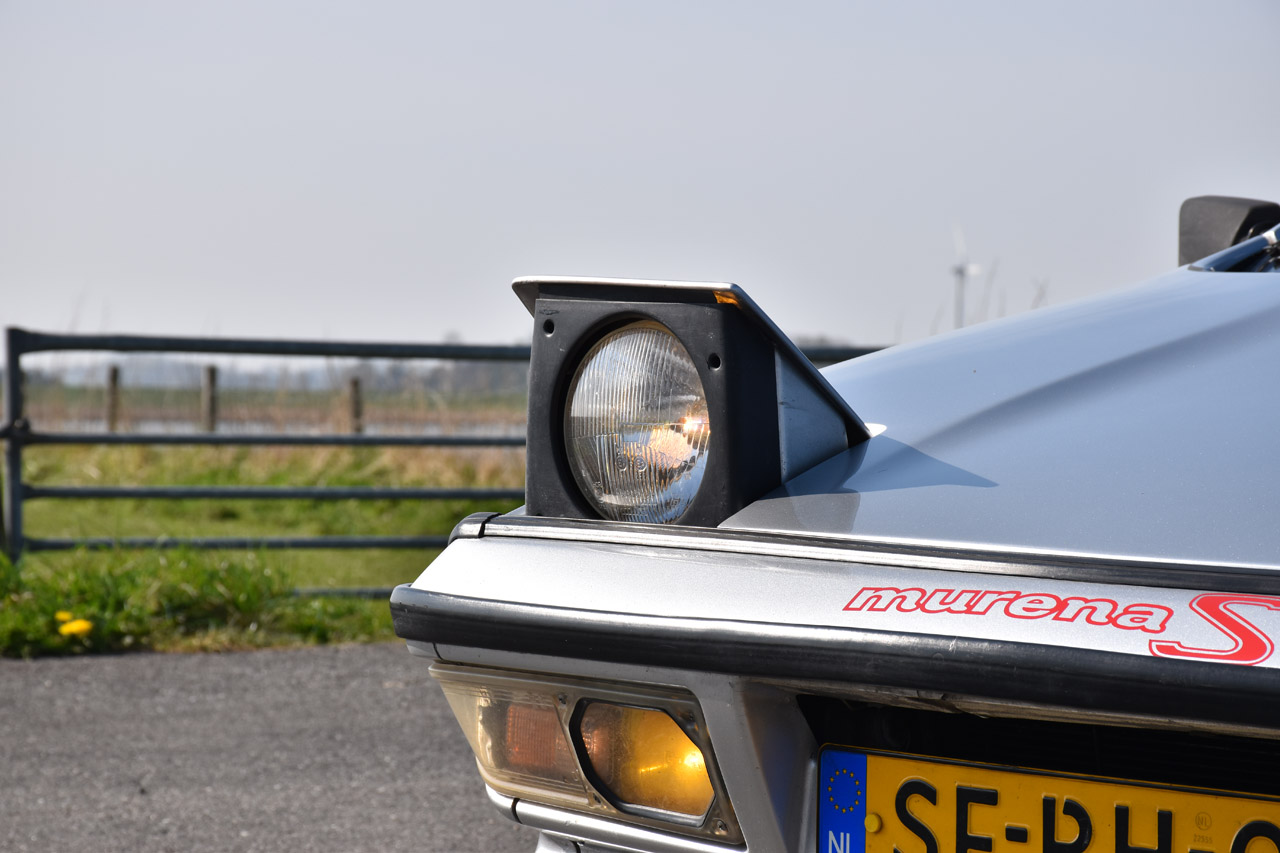 The Murena’s engine came in two versions; the 1.6-liter SIMCA engine from the Talbot Solara, and soon after, a more robust 2.2-liter SIMCA Type 180 engine, developed for the Talbot Tagora. The Murena seen here is the 2.2 version. Another substantial change between the Bagheera and the Murena was the addition of a 5-speed manual transmission.
The Murena was the last in the line of the three-across-seat, mid-engine, two-door coupes from Matra. Sales were lackluster, due in part to the rise of the hot hatch. This newer class of car could seat four, go faster, and cost less than a traditional sports coupe.

Just 10,613 examples were made before Matra starts working with Renault in 1983, which led to the marque being discontinued. Its production line at the Romorantin-Lanthenay Plant was converted to produce the Matra-designed Espace MPV, also part of the Museum’s collection.

Romorantin, an agreeable little town situated in the Loir-et-Cher region of France, from which a succession of original, quirky and sometimes brilliant cars emerged for over a quarter of a century.

The company that built those cars was Matra (a contraction of Mecanique Aviation TRAction), an aerospace and defence company that branched out into the production of road and racing cars. The Matra story is an interesting tale, but it’s one for another day.  Today, we’re going to focus on one particular Matra model. And in the true spirit of Matra quirkiness, we’ll start with its predecessor.

As some of you will know, Matra teamed up with Simca in the early 1970s to produce a pretty mid-engined sports car: the Bagheera. Clad in a stylish composite body and bestowed with an interior that would have done NASA proud (and not just because the three-abreast seating echoed the accommodation in the Apollo space capsules), the Bagheera was launched at the 1973 Le Mans 24 hours, a race won by its big sister, the Matra MS 670B.

The Bagheera received a warm welcome from the motoring press and the car-buying public alike, winning the Style Auto award for 1973 and enjoying a production run that extended to just under 48,000 examples.

There were, however, a couple of serious problems with the Bagheera: a lack of power (it was powered by 1294cc and, later, 1442cc overhead valve Simca engines) and the chassis’s unfortunate penchant for dissolving into a heap of rusty flakes.

As for the rust problem, Matra installed huge hot-dip galvanisation tanks in their Romorantin factory, but these came too late for all but a handful of the very last Bagheeras.

During the course of the Bagheera’s seven year production run, Chrysler sold its European operations (including Simca) to PSA (Peugeot) for the princely sum of one dollar. In exchange, PSA inherited Chrysler Europe’s debts and a model range that included the Bagheera and another quirky Matra, the Rancho.

Matra soon reached a commercial accord with PSA in the same way that it had with Simca, and a new company was born: Matra Automobile. 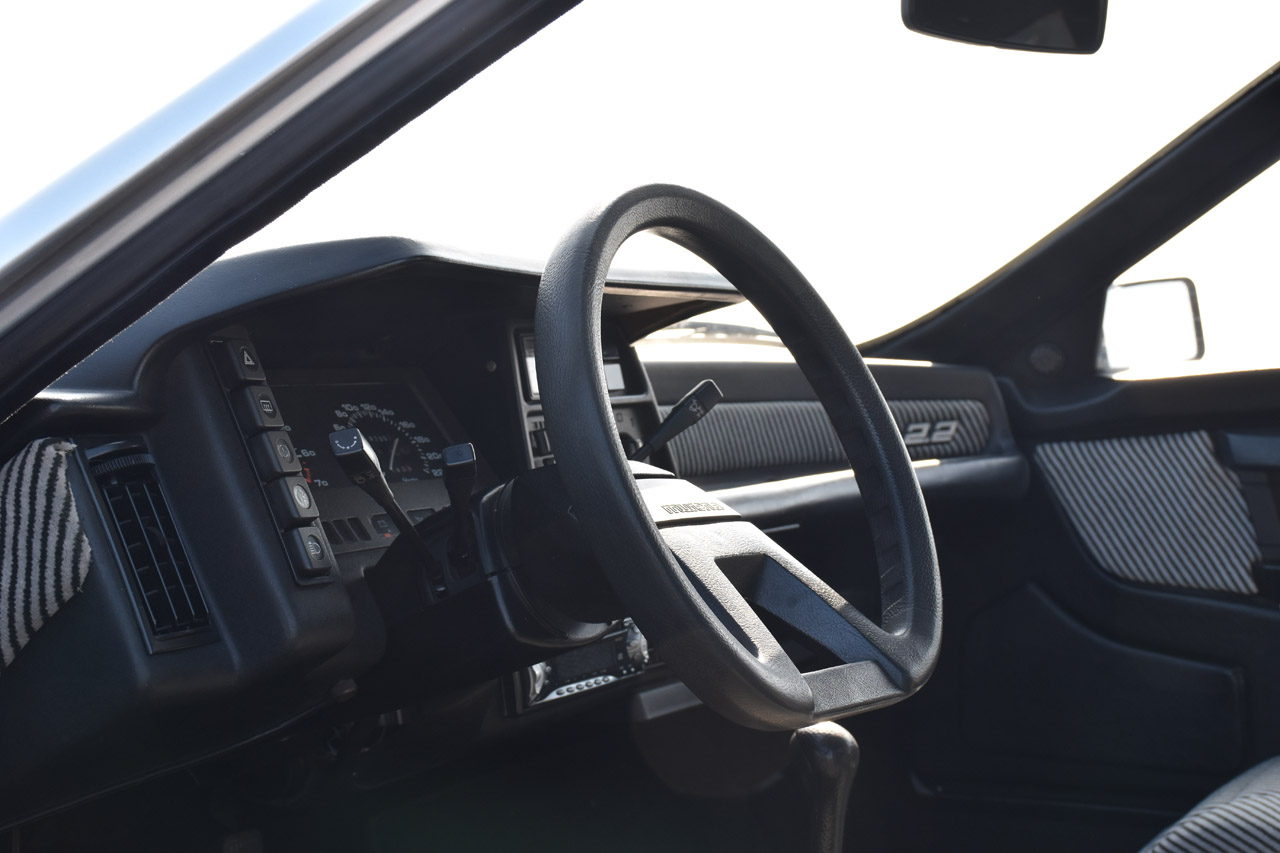 In 1980, the first fruit of that alliance was revealed: a wedge-shaped slice of automotive sculpture that would replace the Bagheera in Peugeot-Talbot’s line-up. The name of that car? The Talbot-Matra Murena.

The Murena represented a sizeable evolutionary step over the Bagheera. It looked more modern, had the world’s lowest drag factor for a mid-engined production car (a record it would keep until it was bettered by the ultra-low production Panther Solo in 1989) and, significantly, was the first series production car in the world to have its entire chassis protected against rust by means of hot-dip galvanisation.

On the powertrain front, the Murena was initially offered with a 1592cc overhead valve unit but it was soon supplemented by a 2155cc SOHC unit which also saw service in the Talbot Tagora. Neither unit, however, gave the Murena the performance to match its exotic looks.

In spite of some strong reviews, including an L.J.K. Setright penned feature in Car entitled ‘Murena the Marvellous’, sales were disappointing. There were a number of reasons for this: it was too expensive at a time when European economies were in recession; the advent of the hot hatch meant that similar (or better) straightline performance was offered in tandem with four seats, and for less money; the Murena’s marketing was lacklustre and the legacy of the Bagheera’s rust problems put off potential buyers.

Giving the Murena more power was one obvious way of increasing its appeal, so Matra engineers looked again at the issue of the Murena’s performance.  Without the funding for an all-new engine, they came up with an affordable and workable solution: improve the output of the 2.2-litre engine by fitting a lightened flywheel, double-twin choke Solex carburettors and a high-lift camshaft. Power rose from 118bhp to 142bhp and the Murena finally had the go to match its show. 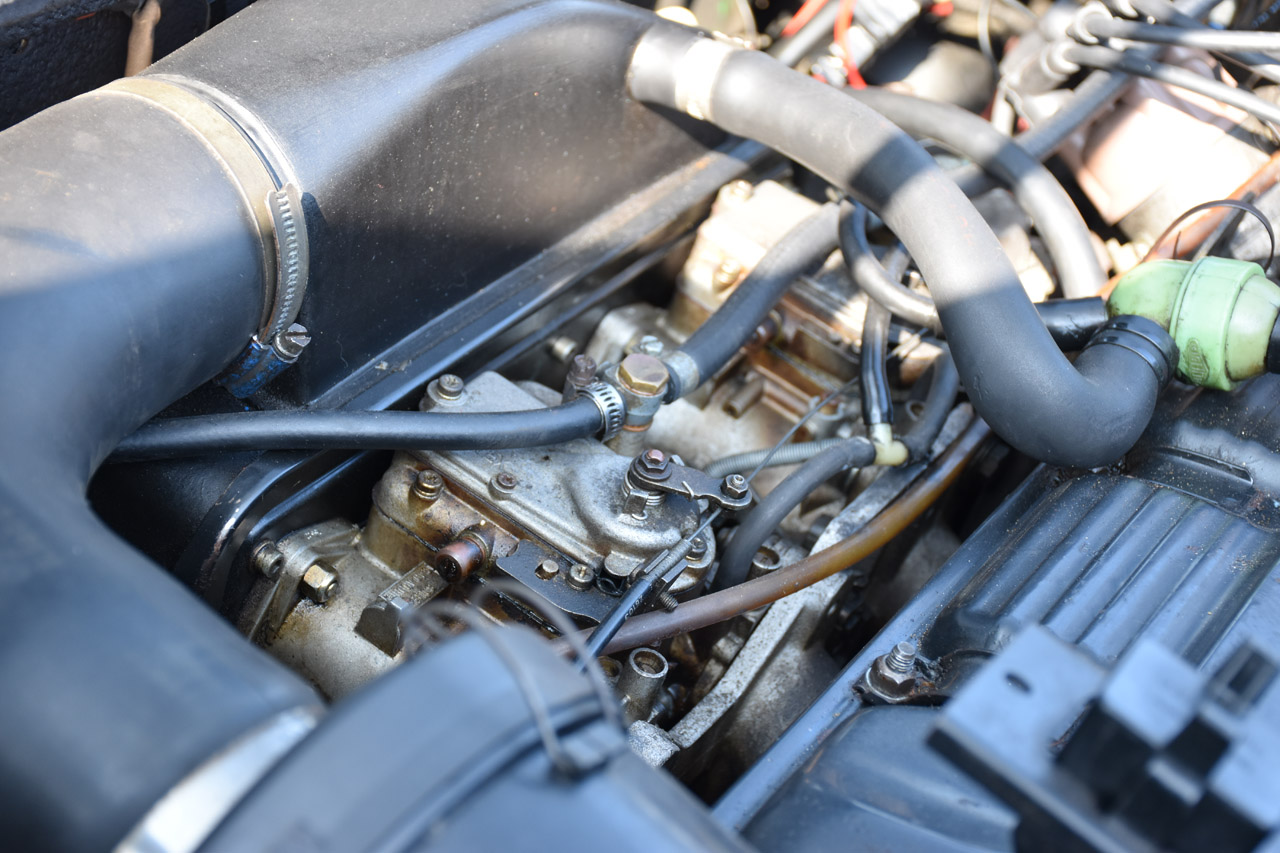 These engine modifications were sold as part of a dealer-fitted kit, known as Préparation 142, that also included a rear spoiler and sill extensions. It wasn’t enough, however, to save the Murena, and only around 100 Préparation 142 kits had been sold when the decision was taken to end Murena production.

For the 1984 model year, there would only be one variant of the Murena: a special run-out model known as the Murena S – essentially a factory-produced version of the Préparation 142 model with a couple of small interior changes.

And that was that. The Murena’s production life was limited to three years and a run of 10,680 cars – far below what Matra and PSA had anticipated.

After the Murena, Matra would never again produce a sports car. Nor would they ever produce another car bearing their own name. In 1984, Matra (having purchased PSA’s share in Matra Automobile) teamed up with Renault to produce a new type of car: the Espace. Matra would go on to build the first three generations of the Espace and the quirky Avantime, all of which would be badged as Renaults.

In 2003, following poor sales of the Avantime, Matra’s parent company decided to cease their involvement in car manufacturing. After lying empty for a time, the factory in which the Murena was produced was almost entirely demolished and the land on which it stood was redeveloped as housing.

Let’s look at the evidence.

The Murena looked good and handled well while still offering typically French levels of comfort. The cabin was spacious for two, but was a mite cosy when the third seat was occupied. That, of course, may or may not have been a bad thing, depending on who was occupying the middle seat…

On the negative side, the fit and finish of the cabin was not of the highest quality, and the cabin styling, though tidy, felt like a retrograde step from the spage age anarchy of early Bagheeras.  The gear lever had a fairly long throw, and over time wear in the linkage mechanism would introduce sloppiness to the gearchange. The brake calipers also presented some problems, having an annoying tendency to stick. 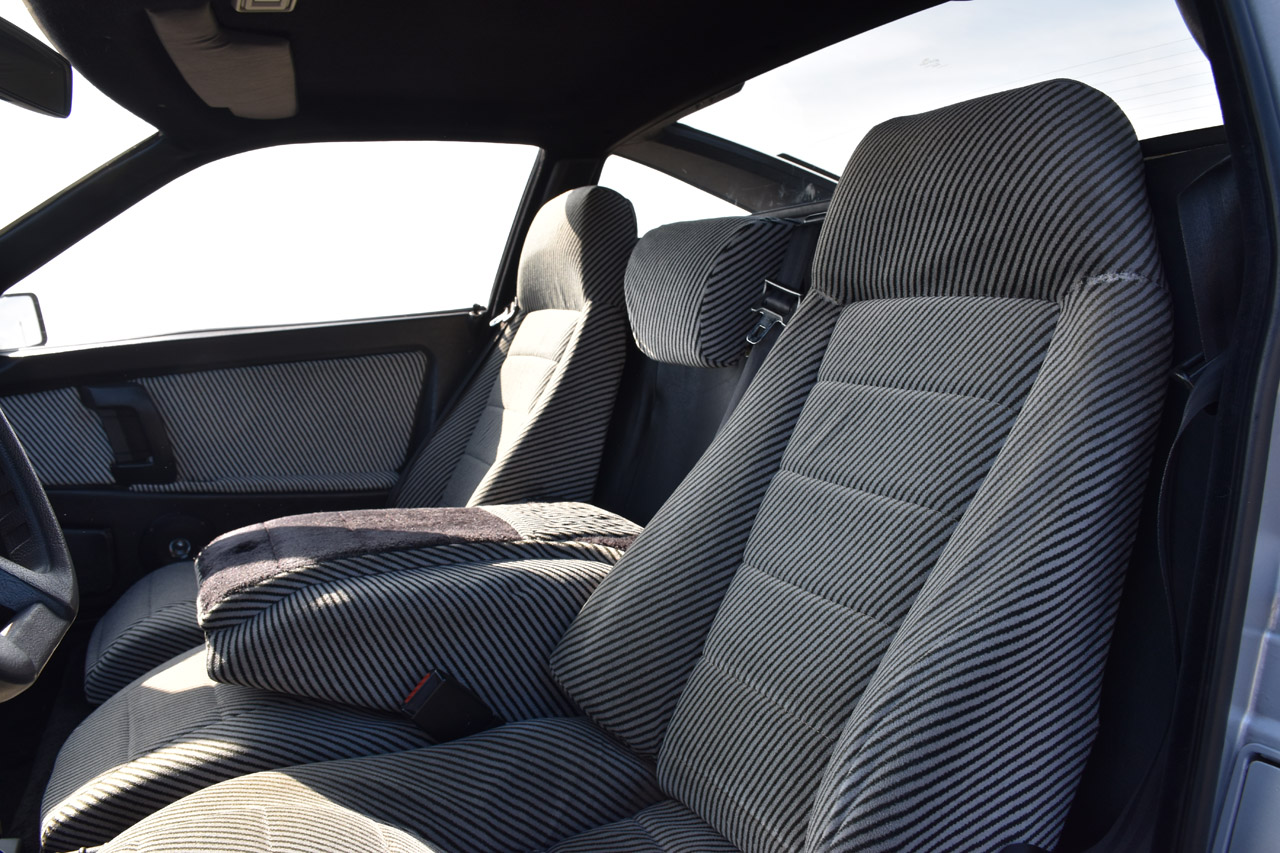 The 1.6-litre model offered good fuel economy for the day, but this came at the price of outright performance. The 2.2-litre version had a reasonable turn of pace, but only the Préparation 142 and S models could really  be said to walk the walk.

The chassis galvanisation was an outstanding success. Many Murenas still survive today, more than three decades after the final Murena S left the factory.

In the final analysis, the Murena was an original, attractive and comfortable sports car that was born at the wrong time and, with the exception of the Préparation 142 and S models, was slightly hindered by underwhelming powerplants.

But that’s no reason for it to languish in the doldrums.

Special thanks to David Milloy for writing this beautifull history.